This gauge is based on some estimates of how many words I produce in my archaic long-hand, double-spaced mode of writing first draft– it’s about 90 words to the page, based on past performance.  Update (22 Aug. 2017): The story decided it was done being written slightly ahead of the goal.  Thus, the gauge above is now locked, as the first draft will never advance beyond this point, and we turn to the new and not much improved second draft indicator: 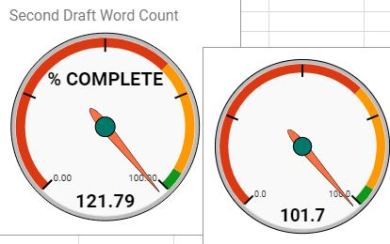 The ideal goal for the novel is 80,000 words; the first draft is (assuming correct estimates) a little shy of that, so in an ideal world, the gauge above will top out rather beyond 100%.  Unlike the previous gauge, where the yellow zone indicated the achievement of the old-school concept of a novel as a work of about 65,000 words, it is now almost utterly meaningless as anything other than a bit of self-encouragement; a visual placebo, to keep me from getting a cerebral congestion, or whatever other fit-inducing maladies people suffered in fictions written in the 19th century.  Likewise, the green zone is less of a “Thus far is sufficient” now than it is a “You’re goin’ great!  Keep it up, sport!”  The green still represents a length of 70,000 words, which is really plenty if the editing process of the second draft removes more than it ads.  I’ll leave it to Stephen King and George R.R. Martin to write the really big books for the moment, as it’s not (yet)† my full-time job.

Update (26 Feb. 2018):  It is become increasingly clear than my words-per-hand-written page estimate in August was not at all right, because the current reading on the active dial is 98.28% and I’ve still got a substantial pile of manuscript on the yet-to-transcribe pile.  I use “ideal” above, which should be taken to mean “gosh, I hope my powers as a short-story writer will extend so far as that.”  A new and more likely estimate puts it at closer to 90,000 words for the finished second draft, and I’m frankly just fine with that– it’s not a door-stop, but neither is it insubstantial.  I am going to leave this dial as the reading creeps above 100% over the next few weeks, because I do like comedy which gently deflates the ego, and “I was thus far out in my brainy calcu-mo-laytin’s” is something of that sort.

Update (28 March 2018): I’ve locked the gauge for the second draft, because it’s done.  Two gauges, now, as you will have seen on your way to these words– the comedic initial estimate and a later one based on holding a ruler up beside heaps of paper that has proven rather closer to right.  The count at end of play is 89,435 words, which is just about perfect.

The next step is to get some people who aren’t me to read it and point out stupid things I’ve gone blind to.  It will not be in stores any time soon.

Update (30 November 2018): As I contemplate the novel at leisure… there’s some problems. Problems, alas, connected to the gender and race of the author, which mean that they’re problems which are thoroughly integrated into the fabric of the work. The answer, I become increasingly convinced, is to burnt it down, sift through the ashes for some of the more durable good bits, and start over.

Which means, in all likelihood, starting something else entirely. Eventually.

†For those who are curious: the writing part of my day is, alas, the lunch break from the actual full-time job which largely pays the bills, during which I also try to eat something. This means an average of not quite 40 minutes of productive writing, five days a week, with little bits infrequently shoe-horned in during weekends and vacations.  Between 2014 and 2016, this approach produced a bit more than 125,000 words of finished text (some of which appear on this very site!), which my research suggests is not too far off of Martin’s Song of Ice and Fire pace as far as words/year goes.  Slow and steady, as the saying goes….